The Most Creative Florist in the World

Create a florist group that makes the most flower-loving country in the world and provide these once more to the society: a world with truly safe feeling and creating a message with flowers full of heart. This is the activity with the idea of reconsidering the value of nature, the value of things, and the value of people from the basis by making up relationship between nature and making an environment with the heart of consideration. First is to let people know the name of the flowers with bouquets, flower arrangements, and decorating flowers on their heads. He is sending messages with belief of connecting the heart between people and plants, animals, and lives that we really don’t mention about in daily life.

─What kind of work do you usually do?

I usually make flower arrangement gifts or do floral decorations for weddings as a florist. I also hold events using flowers or do flower demonstration live performances for foreign countries. From June 2014, I started “HANANINGEN PROJECT.” We decorate flowers on customers’ heads and take pictures in a studio. It’s a relationship building project between flowers and people. 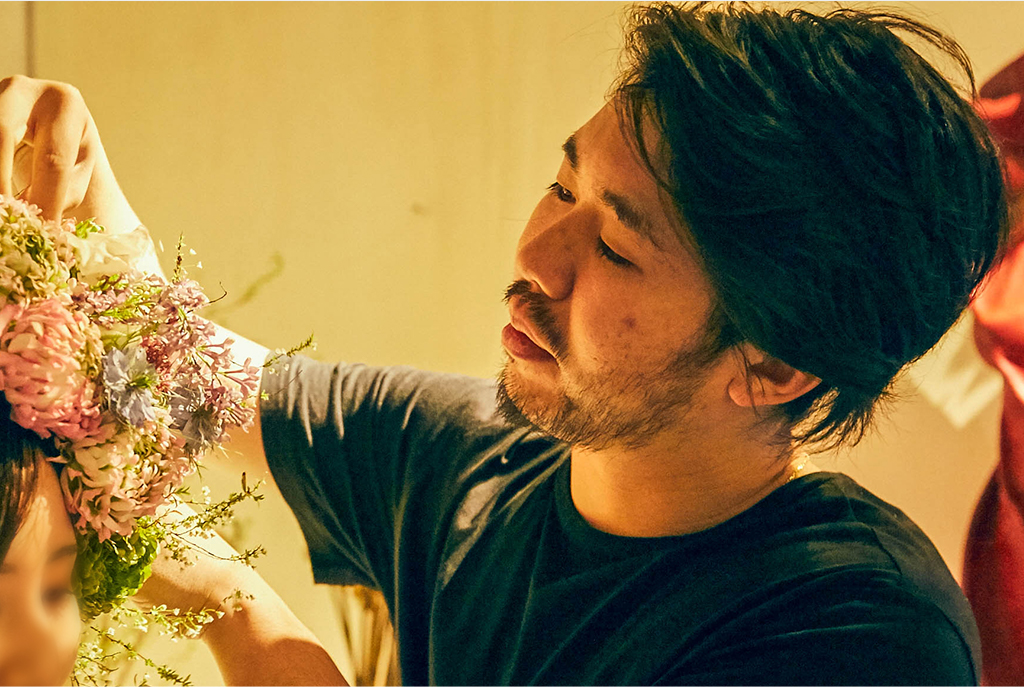 ─Why did you become a florist?

I admired cool adults since I was young. But what kind of people are they? I was thinking about that for a long time, but I didn’t have a clear answer. Then, Great East Japan Earthquake occurred. I faced a situation that blaming others by saying such things like the society is bad or that idea is wrong is totally nothing. And I found out that an adult that I wanted to become was “a person who loves nature and makes a world of assured feeling.” I wanted to become an independent adult with belief of: I’m acting for the Earth no matter how others are. But, even though I decided to become a person that loves nature, I didn’t have any feelings toward plants and of course I didn’t even think soil is alive at the time. So, I started to study about flowers because I thought I needed to get involved with plants and creatures actively.

─Was there a turning point for starting your current job?

Yes, that was living in Vancouver after the earthquake. I worked at a flower shop for a year and a half, and went mountain climbing a lot. The nature there was so beautiful. I had a chance to become an assistant of a fashion producer, too. I really tried hard to study a lot from wonderful designers and artists around me. That experience still means a lot to me when I do work related to wedding or fashion as a flower designer.
In Vancouver, I felt big power of nature. In the mountains of Canada, when I see birds or squirrels getting on my shoulder, I learned from them that we are all equal living things. It’s something really natural, though. If we don’t take care of nature, there’s no future for humans. But I didn’t feel like saying “Protect the nature!” in a big voice. So, I thought if people know the beauty and the power of flowers, which is pretty familiar nature around us, they would naturally feel like taking care of nature.

─What did you do after coming back to Japan?

I opened a flower shop named “GANON FLORIST” in Sapporo, the place where I grew up. But honestly, I didn’t have strong intention to open a flower shop. I had an exorbitant, but important goal: make the world peaceful.
I had a sense of danger that this world will go crazy if there aren’t any place for humans to get involved with nature. And a flower shop was just a form of making that in shape. But, of course, this aim wouldn’t be understood so quickly by people (haha). There were only few customers and the flowers were still something far from people.
So, I started “HANANINGEN PROJECT” saying “Wouldn’t you like to decorate flowers on you, not in your house?” By taking a picture of a beautiful look integrated with nature, I wanted to make memories of flowers in customers’ mind. Customers increased gradually and one day, one person said to me, “I’d never forget the name of the flower used today.” And I thought, maybe I could make my wish true by continuing this HANANINGEN.
When people find their favorite flower, they would actually notice other kinds of flowers that they haven’t been aware of, and how they see nature will change. I want to make the world peaceful by cooperating with customers who had a change on their views by experiencing HANANINGEN and also people who have same idea as mine. My role is not fighting with others, it’s just planting flowers silently. 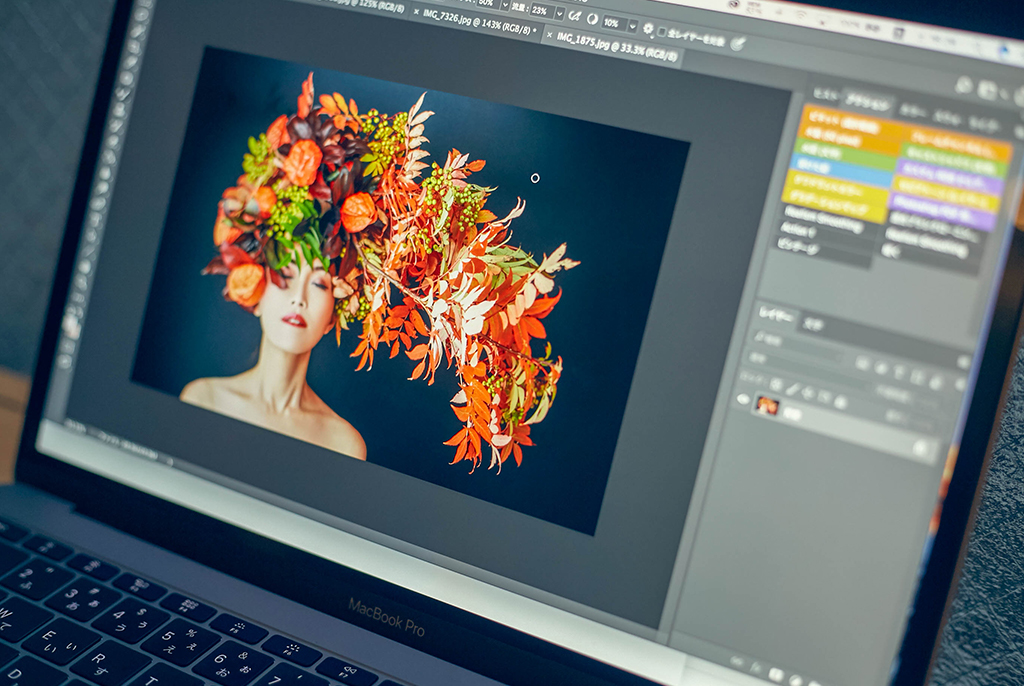 ─The word “sprout” to express the customers of HANANINGEN PROJECT is pretty impressive.

When I used the word “sprout” seeing the customer integrating with nature, some customers started to say, “I sprouted.” when they post pictures on SNS. And people who use that word gradually increased.
Some people come to the studio with difficult situations; have limited remaining days, lost their hair from diseases, or in bitter grief. When I have a talk with customers while we choose flowers, I realize that there is something really hard can happen or sometimes feel the momentariness of life. I hope they can get cheered up or feel calmer by touching flowers and seeing a picture of themselves look like sprouting beautiful flowers. There are even some people who chose flowers for a funeral themselves by experiencing “sprouting.” They became free from common sense such as “flowers for funeral is chrysanthemum” and there are more people who can love nature by their own sensibility. I think a florist is a very nice job. 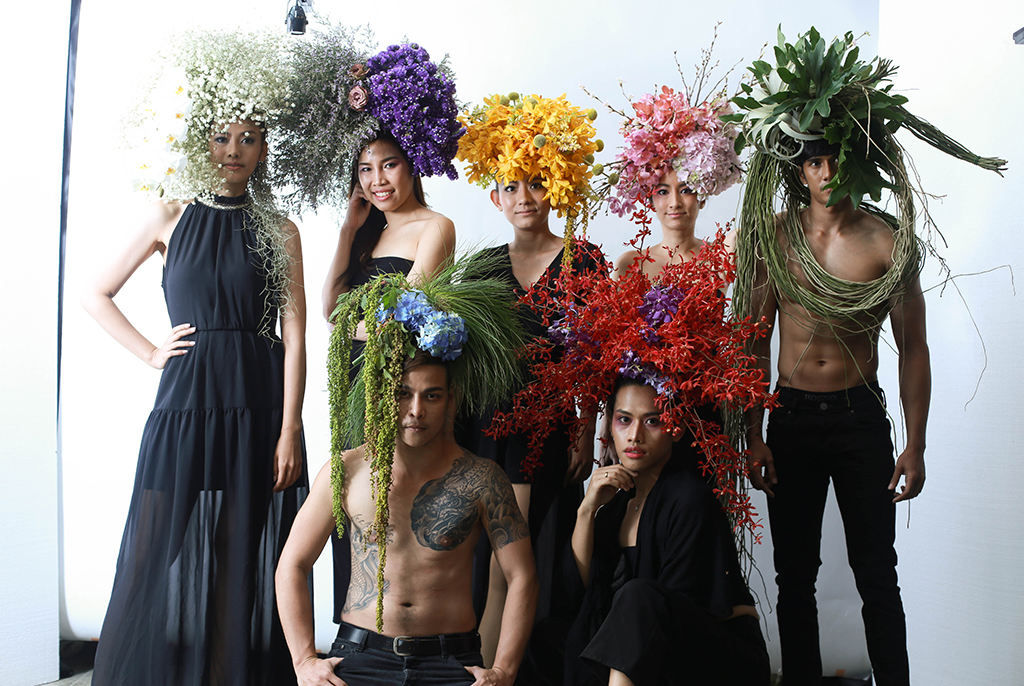 ─There are already 8 shops in Japan only in 3 years. It seems like HANANINGEN PROJECT is spreading well.

Well, in my mind, it should have been a lot bigger (haha). I truly believe that it’s necessary business for the society and I’m making my best effort on it. So, when I have troubles on things around me, I always felt like “This is not my business.”Now, I know that it’s also important to solve those small problems too, but what I imagined being 30 years old when I was younger was a lot greater. The world was supposed to be much more peaceful (haha).
I think there are many people that feel like a big trouble can happen if we don’t take care of nature. Also, a culture of sending flowers as a gift is everywhere in the world.
But I think it’s not speedy enough because I don’t have enough power or knowledge yet. However, I think I was really lucky and met great people to have a chance to go abroad in these few years. Many people supported me, and I was able to work under influence of admirable people.

─By the way, who do you admire?

One is Wright Brothers. I think they were trying a lot of ways everyday saying, “Can we fly tomorrow?” and toasting every night going toward a goal that no one has ever seen. When I imagine that scene, I feel so jealous and irritating (haha).
The one who influenced me a lot mentally is Gaudi, an architect. I now work with The Antonio Gaudi Foundation, and I really respect him because he was always thinking of what he can leave behind while he is alive. I respect people pretty easily. I’m a person’s good-part thief (haha).

─Please tell us what you want to do in the future.

Well… if I say it in one word, it’s giving back. How much I can give back to people is what kind of the Earth I can leave for people who helped me, I think. I want this project to become popular in many areas. I want to hurry up to expand the project and get out from the world of self-satisfaction.
Another one is to become an adult who can show “The world is fun!” to the next generation. My work is to throw away stereotypes and make people smile. And I want to tell them that this is something really fun.